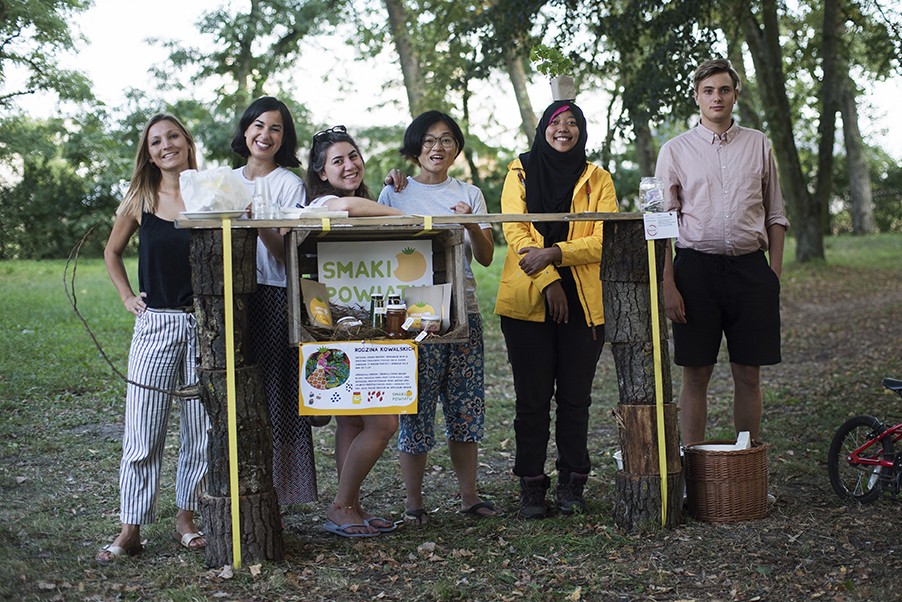 Taste of the Region is a new market concept that sells local products with flexible system, utilizing bike trail in the region.

Lubelskie (Lublin Voivodeship) is a known agricultural area called a food granary of Poland. A substantial share of utilized agricultural lands (1444 thousand ha) in the area of the voivodeship (70%) gives us the first position in the national ranking. It is one of the three regions in Poland with the best water conditions, soil quality, agro-climate and land-form. Based on this potential, we believe that the project should solve a problem in are a of Agriculture and Distribution Channel.

After working on primary research, we got an opportunity to interview with local stakeholder: from the government, farmers, and NGO that acts as the agent of change in the Radzyn Podlaski Region. Most of the conversation is conducted in Polish, and it’s a challenge to fully hand the trust to the translator, and also extracting insight from language that you are not familiar with.

We found that small-farmer is having a lot of problems to sell their product, because of limitation of quality, a variety of product, (while the poly-culture is still practiced), and also flexibility (as most of them have multiple jobs). But their produce plays an important role in preserving local food heritage in the region. The farmer may sell goods within their villages but, selling them in another town will require legal permission and a lot of paperwork.

In the next day, we deepen the research with field observation, including a visit to a small farm, interviewing people that involved I local product distribution channel, and understanding customer/buyer preference when shopping domestic product.

After that we try to find the friction and also the aspiration from 3 key stake holder.

How might we help small farmer sell their product more effectively? From the question, we create almost one hundred ideas and dot voting to choose one that we feel strongly about.

In the field, we received information that the county just opened a new bike trail (the blue trail) to attract more tourist,. Currently, the path is not provided with any pit stop shop and we identified this trail as an opportunity to not only help local farmer sell their product but also for a visitor to access high-quality local product.

Taste of the Region (Smaki Powiatu) is a new market concept that sells local products with flexible system, utilizing bike trail in the region.

One Farmer, One Box

Unlike the traditional system where the farmer is expected to supply product consistently, and also charge percentage from revenue generated. SMAKI using a flexible system where farmer received one box that they can fill with anything they want, depend on the product availability of the day.
The system also uses a fixed-minimum pricing system where the farmer pay a minimum fixed rate for one box, no matter how much
the revenue they generated from goods inside the box.

The most important part of the grassroots design project is to have the idea tested and validated. Jeremiaz from my group magically built a simple stand from the material found nearby the farm in one night. We successfully approach two family farm and convince them to sell the product with the system.

The idea was also presented in the Final presentation of HOLIS. We invited stakeholder, partners and villagers to come and gave feedback to the concept.

The concept is well-accepted, people love the friendly graphic and visual, also some of them apparently never try the product we are introducing and really surprise with the quality. Overall we believe this is a successful design intervention.

See the presentation of the project here.

Holis 2018 was co-financed by the Governments of the Czechia, Hungary, Poland and Slovakia through Visegrad Grants from International Visegrad Fund. The mission of the fund is to advance ideas for sustainable regional cooperation in Central Europe.